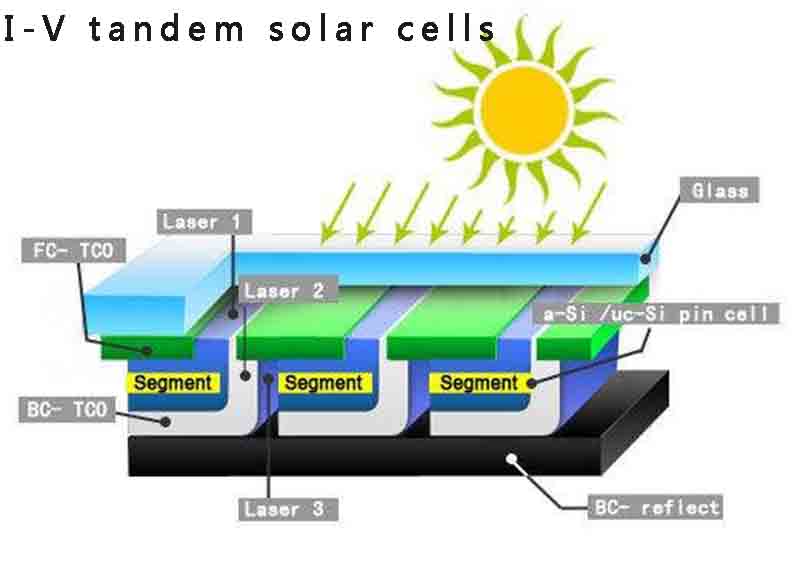 Discussion on the Development of I-V Group Tandem Solar Cells

In the design of solar cells, spectral matching is an important issue to be considered. Single-bandgap solar cells can only absorb sunlight with a frequency greater than a certain frequency, and the absorption is not complete, which leads to low conversion efficiency. Using semiconductor materials with different band gap widths to prepare multi-band gap solar cells can selectively absorb and convert different sub-domains of the solar spectrum, and achieve a substantial increase in the photoelectric conversion efficiency of solar cells. Multijunction tandem cells have adopted this concept and have been widely used.

Beginning in the late 1960s, GaAs solar cells were fabricated using liquid phase epitaxy (LPE). In the 1980s, people began to use metal organic chemical vapor deposition (MOCVD) technology and molecular beam epitaxy (MBE) technology, especially the development and application of MOCVD technology, which greatly expanded the selection range of I-V materials and produced Various complex device structures have improved the research level of GaAs-based I-V solar cells. At this time, Henry of Bell Labs in the United States calculated that under 1 sun, when the number of sub-cells is 1, 2, 3 and 36, the theoretical limit efficiencies of tandem solar cells are 37%, 50%, and 56%, respectively. and 72%.

(1) Forward growth triple junction GaAs solar cell
Triple junction cells usually have GaInP/GaAs/Ge series and GaInP/GaAs/InGaAs series. Adding 1% (mass fraction) of In to GaAs makes it more compatible with the substrate Ge lattice, as shown in Figure 2-6. In 2002, the disordered GaInP structure was used to increase the band gap to 1.89eV, making GaInP/ The GaInAs/Ge tandem cell efficiency reaches 29.2%. There are also many researches on multi-junction solar cells using Ge as the substrate.

At present, the most mature triple-junction tandem solar cells are Ga0.5 In0.5P/Ga0.99In0.01 As/Ge solar cells. Because the cell is a lattice matching system, the material with the best crystal quality can be obtained during growth; the double heterojunction tunnel junction is used to reduce the further diffusion of impurities in subsequent growth; instead of AlGaAs material, GaInP with stronger oxidation resistance is selected material as a top cell. However, the lattice matching system also has unfavorable factors, such as the existing band gap combination is far from the optimal band gap combination; the Ge cell absorbs more low-energy photons, and the photogenerated current is almost twice that of the top cell and the middle cell; The battery draws the least current, limiting the photocurrent of the entire solar cell.

Due to the limited development space for prioritizing lattice-matched cells, people began to give priority to solar cells with matching band gaps, so that the band gaps of the top and middle cells and the thickness of the bottom cells should be reduced to achieve true current matching. When the cell band gap in GaInAs is 1.23 eV, the GaInP top cell is lattice-matched to its lattice and the Vi sublattice is completely disordered, the theoretical AMO efficiency of the GaInP/GaInAs/Ge triple junction cell is up to 38%.

However, the lattice mismatch will also increase the dark current of the top cell, middle cell and bottom cell, which deteriorates the efficiency of the entire solar cell. It is hoped that the dislocation density can be reduced by the method of gradient buffer layer, that is, gradient and buffer layer to reduce dislocation density. By adjusting the lattice, the graded layer can effectively prevent dislocations from propagating to the active layer. In 2007, Spectralab, an American spectroscopy laboratory, used Ga0.44In0, 56P/Ga0.92In0.08As/Ge three-junction deformed solar cells, and achieved a conversion efficiency of 40.7% under the concentrating conditions of AM1.5 and 240 times the sun. This is the first time in the world that a monolithic solar cell has exceeded 40% efficiency.

(2) Inverted growth tandem solar cells
In recent years, many R&D institutions have carried out research on inversion growth technology, that is, growing GaInP material on the substrate, then growing GaAs material, and then bonding the epitaxial wafer to a second support, usually Si, glass and other cheap materials The first substrate is finally peeled off to expose the top cell using a lift-off technique. The advantage of this method is that the substrate can be reused after some treatments, and good crystal quality can be grown even if the substrate is lattice mismatched with the bottom cell. However, since the lift-off technology needs to be further improved, the complex process of reverse growth increases the difficulty of developing such batteries.

(3) Solar cells with more than four junctions
The lattice-matched GaInP2/Ga(In)As/Ge triple-junction cell material system with Ge is not the most ideal choice for space or terrestrial sunlight. Since beyond the absorption limit of Ga(In)As (about 880 nm), there is still a considerable amount of infrared light in the solar spectrum that can be utilized by the Ge bottom cell, making its short-circuit current density much higher than that of the current-matched GalnP2/GaInAs Two-level top battery.

For example, the theoretical efficiency of four-junction GaInP/GaAs/InGaAsN/Ge (1.85/1.42/1.05/0.67eV) solar cells exceeds 40%. However, due to the too small minority carrier lifetime of GaInNAs materials, the photocurrent of solar cells is severely limited, which becomes the main obstacle to the development of quad-junction solar cells. In addition, the Fraunhofer Institute of Solar Energy in Germany adopted different ideas and carried out research work on the structure of AlGaInP/GaInP/AlGaInAs/GaInAs/Ge five-junction and AlGaInP/GaInP/AlGaInAs/GaInAs/GaInNAs/Ge six-junction solar cells.

At present, the developed five-junction solar cell has obtained an open circuit voltage of 5.2V and an efficiency of 24.0% (AM0). However, the performance of the cells is still lower than that of existing triple-junction solar cells due to the unsolved problem of the ultra-wide-bandgap tunnel junction between AlGaInP and GaInP subcells.

Read more: Introduction to the structure and principle of solar cells and electrical performance parameters