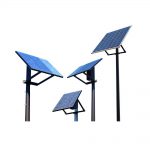 Do you know the working principle and production process of solar panels?

Knowledge about solar panels
Solar panels are a combination of solar cells, so it is necessary to have a clear understanding of the production process and working principles of solar cells.
①The working principle of solar cells
As mentioned earlier, a solar panel is a combination of solar cells. What is a solar cell? A solar cell is a semiconductor device that converts light energy into electrical energy. Its working principle is based on the photovoltaic effect of the semiconductor PN junction.
Conductive carriers in semiconductors are electrons or holes, and related concepts can be found in any textbook on semiconductor physics. In a pure silicon semiconductor crystal, the number of free electrons and holes are equal. If the silicon crystal is doped with impurity elements such as boron, aluminum, gallium, or indium that can capture electrons, it constitutes a P-type semiconductor; if the silicon crystal is doped with impurity elements such as phosphorus, arsenic, or antimony that can release electrons, it will It constitutes an N-type semiconductor. If these two semiconductors are combined together, electrons or holes will move from the high-concentration area to the low-concentration area, thereby forming a PN junction at the interface and forming a barrier electric field on both sides of the junction, making the electrons Or the diffusion movement of the holes reaches a state of equilibrium. When sunlight irradiates the PN junction, the atoms in the semiconductor release electrons due to light energy, generating electron-hole pairs. Under the action of the barrier electric field, the electrons are driven to the N-type region, and the holes are driven to the P In this way, a photo-generated electric field opposite to the direction of the barrier electric field is formed near the PN junction. A part of the photo-generated electric field cancels the barrier electric field, and the rest makes the thin layer between the N-type region and the P-type region generate electromotive force, that is, photovoltaic electromotive force. When the external circuit is connected, electrical energy is output. This is the basic principle of PN junction contact monocrystalline silicon solar cell power generation. If dozens or hundreds of solar battery cells are connected in series and parallel to form a solar cell solar panel, under the sunlight, a considerable output power can be obtained.
The relevant schematic diagrams are shown in Figure 5 to Figure 8.