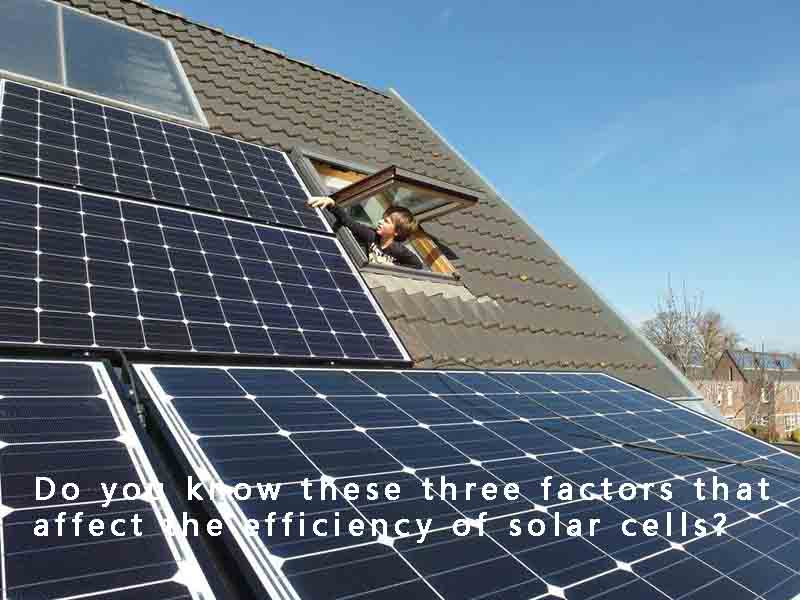 Do you know these three factors that affect the efficiency of solar cells?

(2) Influence of series-parallel resistance
The working circuit diagram of the solar cell can be equivalent to that shown in Figure 1. In this figure, RS is the series resistance, which is mainly composed of the bulk resistance, surface resistance, front and back grid line resistance, grid line and silicon surface contact resistance of the solar cell, etc. Part of the composition; Rsh is a parallel resistance, mainly due to the internal defect of the silicon wafer or the side leakage resistance caused by the unclean edge. In general, the larger Rsh is, the better, and the smaller RS ​​is, the better. In an ideal situation, Rsh can be considered as infinite, Ish can be ignored, and RS can be equal to zero.

The effect of temperature on the I-V characteristic curve is shown in Figure 2. When the temperature rises, the short-circuit current increases. From the change of the area enclosed by the I-V characteristic curve and the coordinate axis, it can be seen that the increase of the specific temperature will reduce the open-circuit voltage. The effect is small, indicating that the temperature increase has a negative impact on the photoelectric conversion efficiency of solar cells. The temperature-short-circuit current curve is a straight line with a slightly positive slope, which is called the current temperature coefficient of the solar cell in the testing of solar module certification.

The effect of temperature on the P-V characteristic curve is shown in Figure 3. When the temperature increases, the total output power of the solar cell shows a downward trend (V decreases greatly, while I rises very small, so P=VI decreases)

(4) Influence of power loss
There are many factors that affect the power loss of solar cells, among which band gap mismatch, series and parallel resistance, grid line shading, and anti-reflection coating are the main factors affecting the power reduction of solar cells.

②Losses caused by series and parallel resistance. When the solar cell works for the load, a part of the electric power will be lost due to the certain resistance of the solar cell itself and the grid lines and other components.

③The shielding of the grid line and the encapsulation glass affects the absorption of light energy. At present, the collection of carriers on the light-receiving surface of silicon solar cells relies on very fine silver grids. These grid lines for collecting carriers will cover 5% of the surface area of ​​the solar cell, and then a corresponding proportion of light energy will be lost. Since solar cells are generally very thin, tempered glass is generally used when packaging components. When sunlight passes through the tempered glass, a certain percentage of light energy will be lost.

There are many other factors that cause energy loss in solar cells, such as the recombination of carriers by crystal defects in solar cells. If we can fully understand and control these factors, it is beneficial to improve the efficiency of solar cells.