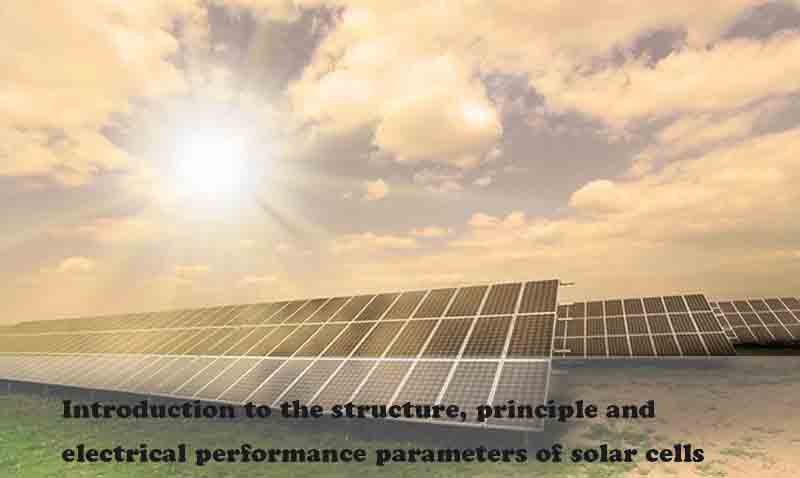 Introduction to the structure, principle and electrical performance parameters of solar cells

Crystal solar cell wafers usually use P-type crystalline silicon semiconductor material as the base region of semiconductor solar cells, with a thickness of 150-400 μm, and the doping impurities are phosphorus atoms with a concentration of 1015cm-3. The emitter region is generally an N-type crystalline silicon semiconductor with a thickness of more than ten microns, and the doping impurity is chlorine atoms, with a concentration of 1016cm-3~1017cm-3. In this way, the emitter region and the base region together form a P-N junction at the interface. In order to increase the absorption of sunlight, an anti-reflection film is generally coated on the surface of the emission area. According to the characteristics and technology of crystalline silicon solar cells, the material of the anti-reflection film is SiO2 or Si3N4. The upper surface of the anti-reflection layer has grid-shaped metal electrodes, which are usually called grid lines. The wider metal electrodes are called main grids, and those with thinner metal electrodes are called fine grids.

When someone radiates light into the solar cell through the anti-reflection coating, photons with energy greater than or equal to the forbidden band width of the semiconductor will excite the generation of electron-hole pairs. The generated electron-hole pairs will be separated by the internal) electric field of the space charge region, and the electron-hole pairs generated in the N region or P region near both sides of the space charge region will enter through diffusion, and then be separated in the end region, and photogenerated and carried. As long as the carriers can cross the space charge region before recombination, they will effectively convert light energy into electrical energy. The separated photogenerated carriers, in which electrons move to the N region by diffusion, and holes move to the P region by diffusion, so that oppositely charged charges accumulate on both sides of the solar cell (both sides of the P-N junction) to form Photovoltaic voltage, which is the photovoltaic effect.

For crystalline silicon solar cells, different regions absorb different wavelengths of photons. The emission area near the solar cell is sensitive to short-wavelength violet light and ultraviolet light, accounting for 5% to 10% of the total light source current; the P-N junction space charge is sensitive to visible light, and the photogenerated current accounts for about 5%; Infrared light is sensitive and generates 80%~90% of the photogenerated current, which is the main component of the photogenerated current. The solar cell forms an accumulated potential at the two poles through the photovoltaic effect. After the load is applied to the two poles, the photocurrent will flow from the P region to the N region through the load under the action of the accumulated potential, and the load will output electric power.

In the formula, S is the solar cell area (m2); Pm is the incident solar power (W/m2).
When the air mass is AM 1.5, the solar irradiance is 1000W/m2, and the ground temperature is 25℃, the maximum output power of the solar cell is defined as the peak wattage (WP) of the solar cell. The photoelectric conversion efficiency of solar cells is closely related to the forbidden band width of the semiconductor materials used in the manufacture of solar cells. Only photons whose photon energy is greater than or equal to the forbidden band width can generate photo-generated electron-hole pairs in the semiconductor, which will be removed before recombination. The built-in electric field is effectively separated to form a photo-generated current. However, the forbidden band width of solar cell materials is not as small as possible, because the photon energy with energy greater than the forbidden band width will be converted into thermal energy, which not only reduces the utilization rate of photon energy, but also reduces the efficiency of solar cells due to the generation of thermal energy. . The band gap also directly affects the open circuit voltage. The larger the band gap, the higher the open circuit voltage (and vice versa), and the smaller the reverse saturation current (or vice versa). Therefore, choosing a battery material with an appropriate band gap is very important for solar cells. The theoretical efficiency has a greater impact. The photoelectric conversion efficiency of solar cells is closely related to the structure, junction characteristics, material properties, operating temperature, radiation damage of radioactive particles and environmental changes, and is an important parameter to measure the quality and technical level of the battery.

Read more: What is the dispensing process of photovoltaic modules?