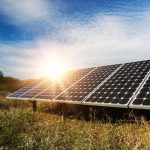 What are the physical and electrical properties of solar panels?

The solar panel standard is an important reference basis for its design and production. The physical and electrical properties of solar panels will be introduced.

When the currents generated by the two batteries in series are not equal (for example, part of the irradiation light of battery 2 is blocked), then the short-circuit current of battery 2 is the maximum current flowing through the external circuit, and the extra current of battery 1 , Which is mathematically equal to Isc1-Isc2 will flow through battery 1 and generate a forward bias voltage applied to battery 1, which in turn generates a reverse bias voltage on battery 2. Since the total circuit is short-circuited, the total The voltage is zero, as shown in Figure 4.

Where: M is the number of batteries in series: n is the number of batteries in parallel: IT is the total current of the battery: IL is the electricity of a single battery
Flow; UT is the total voltage: N is the ideal factor of a single battery: k and T are physical constants.
The I-U curve of photovoltaic modules is shown in Figure 8.

The condition of the battery interconnection circuit in the solar cell module has a significant impact on the actual performance and working life of the module. When solar cells are connected in series and parallel, the operating characteristics of a single cell, such as current mismatch (or detuning), make the output power of the component less than the sum of the maximum output power of each cell. This power loss caused by mismatch is most obvious when the cells are connected in series. The mismatch effect of the module is caused by the cells in the module do not have the same electrical performance or have different electrical properties.
It includes current mismatch and voltage mismatch. Since the output power of the module is determined by the most
It is determined by the battery with small output power, so the mismatch of the module is a serious problem, such as the irradiated light of a battery in the module
When the battery is blocked and other batteries are still working, the power generated by the working battery is consumed on the non-working battery instead of the external load, which will cause local power consumption and local overheating. Cause irreparable damage to the components. The component mismatch caused by shading is also called the hot spot effect, and the hot spot is the specific manifestation of the mismatch effect.
Some literature pointed out that for monocrystalline silicon solar cells, the mismatch loss caused by monomer differences during the manufacturing process is about 0.2% to 1.5%. For amorphous silicon, the mismatch problem has not been studied enough, but there is a significant attenuation phenomenon in amorphous silicon. After a group of components are connected in series and parallel, individual differences will become very large in actual use, and the mismatch can be definitely The phenomenon is more serious and can even affect the normal use. The power loss of photovoltaic modules is shown in Figure 9, and the influence of a mismatched output cell on the series battery pack is shown in Figure 10.

In the case of a short circuit, the poorer output characteristics are reverse-biased and consume a lot of power. The current output of the series battery pack depends on the worst battery. When the current of one battery in a series of batteries is significantly lower than the current of the other batteries, the hot spot effect will occur. For example, when one battery in a series of batteries is blocked by the light, the current on the battery will be generated. Significantly smaller than other batteries. At this time, the total current is limited to a minimum. The positive bias generated on the battery that generates a large current will be added to the shielded battery, and the shielded battery will become a consuming load. The power generated by other batteries is released in the form of heat, which can cause damage to the components.

By increasing the number of series modules and parallel battery strings for each component or branch, the tolerance of the components to battery mismatch, battery rupture, and partial shadows can be improved. This is the series-parallel method.

The hot spot effect can also be avoided by connecting a bypass diode in parallel. The parallel diode and the solar cell have opposite electrode directions. Under normal operation, each solar cell will be at a forward bias voltage, and the bypass diode will be in a reverse direction. Under bias voltage, so the bypass diode is in an open state and does not work. However, when one battery in a string is reverse-biased due to current mismatch, the bypass diode will be forward-biased and conduct, so the current generated by the good battery will flow through the external circuit instead of being positive on the good battery. Bias voltage, so the maximum reverse bias voltage applied to a bad battery will reduce the voltage drop of the diode, thus limiting the current and preventing the hot spot effect.

In the case of a short circuit, there are currents that match each other, so the voltage applied to the solar cell and the bypass diode is zero, as shown in Figure 12.

In the case of current mismatch, the current flowing on a good battery is equivalent to adding a forward bias voltage, and at the same time adding a reverse bias voltage to the bad battery, but at this time, because there is a forward-biased bypass diode, Make the current flow through the bypass diode to avoid the power consumption on the bad battery, as shown in Figure 13.

In the case of an open circuit and the currents between the batteries match each other, the short-circuit current is forward biased to each solar cell and reverse biased to each bypass diode. At this time, the bypass diode does not work, as shown in Figure 14. Shown.

In the case of open circuit and current mismatch, although the voltage of the solar cell whose part of the irradiated light is blocked is reduced, the bypass diode is still reverse biased, so it does not work. If the irradiating light is completely blocked, the blocked battery at this time is equivalent to no photo-generated current, so the bypass diode still does not work, as shown in Figure 15.

If there is no bypass diode, when the battery is shaded and the current mismatch is caused, the bad battery will bear a larger voltage drop (depending on the number of batteries in series); if there is a bypass diode, it will be reverse biased. When the voltage is greater than the threshold voltage of the diode, the bypass diode is turned on, so that the voltage drop on the bad battery is only the threshold voltage of the diode, as shown in Figure 16.

In the case of a bypass diode, when the battery is blocked, the bypass diode is turned on when the reverse voltage is equal to the threshold voltage (this voltage is equivalent to the open circuit voltage), so that the total current will not be reduced to the current of the bad battery Size, thereby reducing the power loss on the bad battery, as shown in Figure18. In practice, the cost of adding a bypass diode to each battery is relatively high, so in practice, a string of batteries always share a bypass diode, as shown in Figure19.