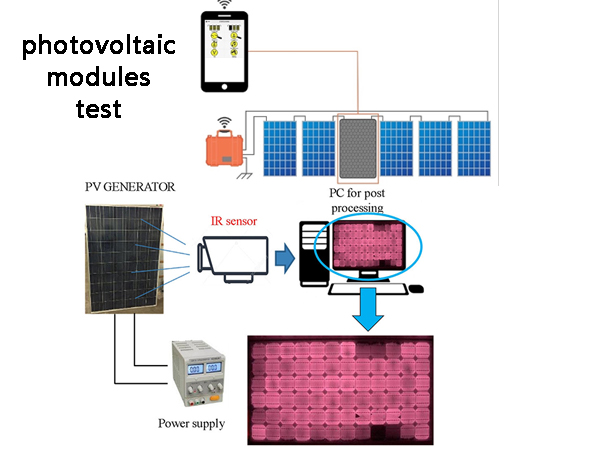 What do photovoltaic modules need to be tested?

1. Photovoltaic module electrical performance test
The electrical performance test of photovoltaic modules is mainly to test photovoltaic modules under standard test conditions (battery temperature: 25℃±2℃, irradiance: 1000W/m2, standard solar spectral irradiance distribution conforms to the provisions of GB/T6495.3) Electrical properties of load changes. The test procedure is in accordance with the method of the GB/T6495.1 standard, and the I-U characteristics of the test components are tested under the standard test conditions. If necessary, the temperature and irradiance can be corrected according to the provisions of the GB/T6495.4 standard.

1) Test conditions
The temperature is the ambient temperature (see GB/T2421), and the relative humidity does not exceed 75%.

1) Worst solar cells present in selected PV modules
(1) Irradiate the non-shading component under a radiation source of not less than 700W/m2, and test its l-U characteristics and the current lMP at the maximum power.
(2) Short-circuit the components and select a battery by one of the following methods:
①The module is irradiated by a stable radiation source with an irradiance of not less than 700W/m2, and the hottest battery is measured with an appropriate temperature detector.
②Under the irradiance specified in step (1), completely block each battery in turn, and select one of them. When it is blocked, the short-circuit current decreases to the maximum. During this process, the irradiance does not change by more than 5%.

2) Determine the worst shading ratio
(1) Also at the previously specified irradiance (within ±3%), completely block the selected cell and check whether the ISC of the module is smaller than the previously determined IMP. If this does not happen, one cannot be sure whether the maximum power consumption will be generated within a battery. At this point, continue to completely block the selected battery.
(2) Gradually reduce the shading area of ​​the selected battery until the ISC of the module is closest to the IMP, and the power consumed in the battery is the largest at this time.

Consider the relationship between Isc and R5h and the shaded area (or ratio Y) of the solar cell.

Of course, not all batteries can achieve the best impedance matching by adjusting the shading ratio. In the case of complete shading, the I-U curves of Y cells with different characteristics are shown in Figure 4. The lower the slope, the greater the parallel resistance of the cells. Considering the “test limit” defined by the maximum output power point of (S-1) battery strings, according to the intersection of the IU curve and the “test limit”, the batteries are divided into voltage-limited (Class A) and current-limited (B) kind). The parallel resistance of type A batteries is relatively large, and the optimal impedance ratio can be achieved by reducing the shading area; the parallel resistance of type B batteries is relatively small, and complete shading is the state where the Y battery consumes the most power.

3) 5h hot spot durability test
(1) Irradiate the module with a radiation source, record the value of lc, and keep the power consumption of the module at the maximum. If necessary, readjust the shading to maintain the lsc at a specific value.
(2) After 1h, block the component from irradiation, and verify that Isc does not exceed 10% of IMP.
(3) After 30min, restore the irradiance to 1000W/m².
(4) Repeat steps (1) (2) and (3) 5 times.

4) Post-test diagnostic measurements
There are no serious appearance defects; the attenuation of the maximum output power under standard test conditions does not exceed 5% of that before the test; the insulation resistance should meet the same requirements for the initial test.

4) Test requirements
The components tested shall meet the following requirements:
(1) No serious appearance defects specified in GB/T9535-1998 or GB/T18911.
(2) Under the standard test conditions, the maximum output power attenuation is not more than 5% of the test value before the test. For thin film modules, under standard test conditions, the maximum output power shall be greater than the minimum value of the nominal power of the module provided by the manufacturer.
(3) According to the provisions of GB/T9535-1998 or GB/T18911, the insulation resistance should meet the requirements of the initial measured value.

3) Final test
(1) Visual inspection of components before and after cleaning and drying.
(2) After the components are cleaned and dried, the l-U characteristics are tested under standard test conditions (STC) according to GB/T6495.1-1996.
(3) Conduct insulation test according to relevant standards.

4) Test requirements
(1) There is no mechanical damage or corrosion that seriously affects the normal working performance of the components.
(2) The reduction in electrical performance (maximum power) should not be greater than 5% of the initial value.
(3) It should meet the requirements of insulation test.